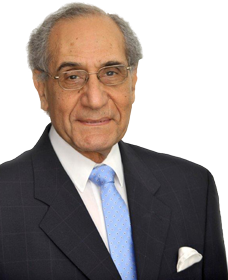 Described by “The Lawyer” as one of the stars of the Chancery Commercial Bar, he has great experience in many fields and has appeared in nearly a hundred reported decisions.

He has frequently appeared in very substantial litigation in the Caribbean and in Gibraltar, leading local lawyers.

He bore the brunt of all the civil litigation in which Asil Nadir, formerly of Polly Peck was involved and has acted in relation to Eagle Trust and Barlow Clowes.

He has special expertise in trusts (see e.g. Neville v Wilson [1997] Ch 144 CA) and in partnership law and considerable expertise in the fields of Property, Insolvency, Intellectual Property and Company Law.

He has advised on and drafted legislation for the Government of Gibraltar. He is available to take the most complex cases involving considerable documentation and very large sums of money. Recorder of the Crown Court, Assistant Parliamentary Boundary Commissioner, Former Chairman of ILEA Disciplinary Tribunal,

Isaac is a member of the Chancery Bar Association and Fellow of the Chartered Institute of Arbitrators.

Isaac Jacob is an independent self-employed barrister registered with the Bar Standards Board of England (ref. no 14014); whose practice is governed by the Code of Conduct of the Bar of England and Wales which code can be found at www.barstandardsboard.org.uk; has full professional liability insurance provided by the Bar Mutual Indemnity Fund Limited (ref BM 2930/039) (details of the world-wide cover are provided at www.barmutual.co.uk); is registered for VAT (reg. no. 243 3843 67); and can be contacted during chambers opening hours by telephone at 02074045055 or by e-mail at clerks@9stonebuildings.com.

In addition to the Terms and Conditions specified in the chambers’ website, optional clauses 7(b) and 7(c) shall apply with the insertion of a figure of twelve and a half million pounds (£12.5m) and optional clause 7(f) shall apply.